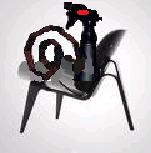 Abyssal Demons are mysterious creatures from a very empty place called the Abyss and require 85 Slayer to kill.

If you look closely at abyssal demons, you will realize that they don't look like demons at all. Instead they look like void shifters which must have escaped from Soul Society Pest Control. The truth is: abyssal demons are actually bottles of windex dyed black. Back in the early days of Prunescape, instead of QA mods, Jagex used bottles of windex to remove bugs from the game. After a while, the bottles started to sweat and pleaded for better working conditions but Jagex ignored their cries and instead had them whipped them into submission.

Then on January 26 2005, several brave windex bottles ganged up on their slavedrivers and overpowered them. They then freed their brethren and took Jagex's whips in case they would need to protect themselves. Riding their mighty desk chairs with whips in hand, the windex bottles escaped to the place where Jagex would never find them: inside their own game.

Dissatisfied with the slavedriver mods, our glorious leader locked them all in his bathroom and forced them to learn how to catch bugs using nothing but chopsticks (they eventually were able to develop a green lantern which made the task much easier.) Once this was accomplished, these mods were then rehired as Prunescape's new QA team.

The reason why nobody can tell that abyssal demons are actually spray bottles sitting in chairs is because of two words: Poor Graphics

To fight abyssal demons, first you have to get them, they can be found

Since they are demons (lolwat?) abyssal demons are affected by the effects of silverlight and darklight, but those aren't really necessary. They are also weak to Magic which I guess would be an alright way of fighting them since their drops can cover a good chunk of the cost.

Contrary to what their combat level suggests, abyssal demons are pretty weak with only mediocre accuracy and defence and a max hit of only 82 Life Points. Most of their combat level comes from their large amount of hitpoints; which makes them great monsters to train on (that is, assuming you don't become a nechryael by the time you finally reach 85 Slayer.)

Use enhanced excalibur, bunyips, food or whatever to heal and just hit them until they die. They're not that hard, really.

Just like in Real Life, beating the bottle can be very rewarding:

Retrieved from "https://prunescape.fandom.com/wiki/Abyssal_Demon?oldid=8644"
Community content is available under CC-BY-SA unless otherwise noted.